With the No. 58 pick in the 2018 NFL Draft, the Atlanta Falcons selected cornerback Isaiah Oliver out of Colorado on Friday night. The pick was announced by former Falcons quarterback Michael Vick.

Oliver has a great combination of size, length and speed. He was a big contributor at Colorado from the beginning of his career, and he finished his three seasons with the Rams with 82 tackles, 25 passes defensed and three interceptions. Oliver will bring both speed and size to the Falcons' secondary, and he is a great athlete who was considered by some experts to be a first-rounder.

"I would say it's just my athleticism, along with my refined technique," Oliver said of what he brings to the table during a conference call after he was selected. "That's something that I've always worked on, these last three years, especially. Just the little things: The way we have our stance at the line of scrimmage, where I have my eyes, where I have my arms, just little things like that. I try to just make those as crisp and as perfect as possible to help me out on game day."

Oliver is a competitive decathlete, which should be all you need to know about his athleticism. In college, he demonstrated good press ability to jam receiver at the line of scrimmage with him long arms before turning and running with them downfield. The 6-foot, 201-pound cornerback has soft hands and can high-point the football when it's in the air.

Artie Burns:NFL.com draft analyst Lance Zierlein compares Oliver to Steelers cornerback Artie Burns, who was selected in the first round of the 2016 NFL Draft out of Miami. Burns has played every game for the Steelers over the past two years, defending 26 passes and recording four interceptions.

Oliver is a competitive decathlete, which should be all you need to know about his athleticism. He demonstrated good press ability to jam receiver at the line of scrimmage with him long arms before turning and running with them downfield. The 6-foot, 201-pound cornerback has soft hands and can high-point the football when it's in the air. 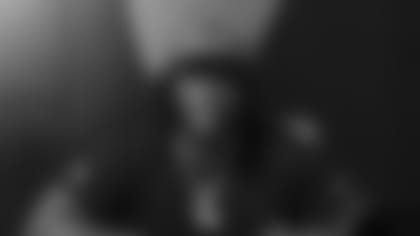 NFL Draft 2022: Why DeAngelo Malone's an intriguing talent you should keep a close eye on during Falcons campaign

How Drake London's competitiveness and family led him to the NFL

London's expected to be the next in line of the Falcons' great receivers. He'll rely on his innate competitiveness and the family bond that got him this far to do so.

NFL Draft 2022: Why Tyler Allgeier could emerge as face of Falcons backfield

Your questions get answers in this Thursday mailbag

'He checked all the boxes': How the Falcons decided on Drake London in 2022 NFL Draft

Three receivers, two defensive linemen and a punter among class of undrafted additions

Andersen shined at running back, quarterback, and linebacker in college.

Everything you need to know about Drake London, Arnold Ebiketie, Desmond Ridder and rest of eight-man class

Drake London is mic'd up for career-high game | Mic'd Up

Marcus Mariota, Desmond Ridder and how Falcons can rebound from Steelers loss

Marcus Mariota speaks to media after loss to the Steelers

Cordarrelle Patterson dashes down the sideline for 22-yard rush

Tyler Allgeier breaks free up the middle for 20-yard rush

Grady Jarrett: 'We have to capitalize off the things we're doing well.' | Press Conferences

Jake Matthews discusses the birth of his son on a game day, coming from football royalty | Falcons in Focus

Richie Grant: 'as long as we are in the hunt we have a chance' | Press Conference

Jaylinn Hawkins: 'preparing for weapons on the perimeter' | Press Conference

Marcus Mariota: 'mentality of being comfortable and uncomfortable in the pocket' | Press Conference

Advertising
The browser you are using is no longer supported on this site. It is highly recommended that you use the latest versions of a supported browser in order to receive an optimal viewing experience. The following browsers are supported: Chrome, Edge (v80 and later), Firefox and Safari.